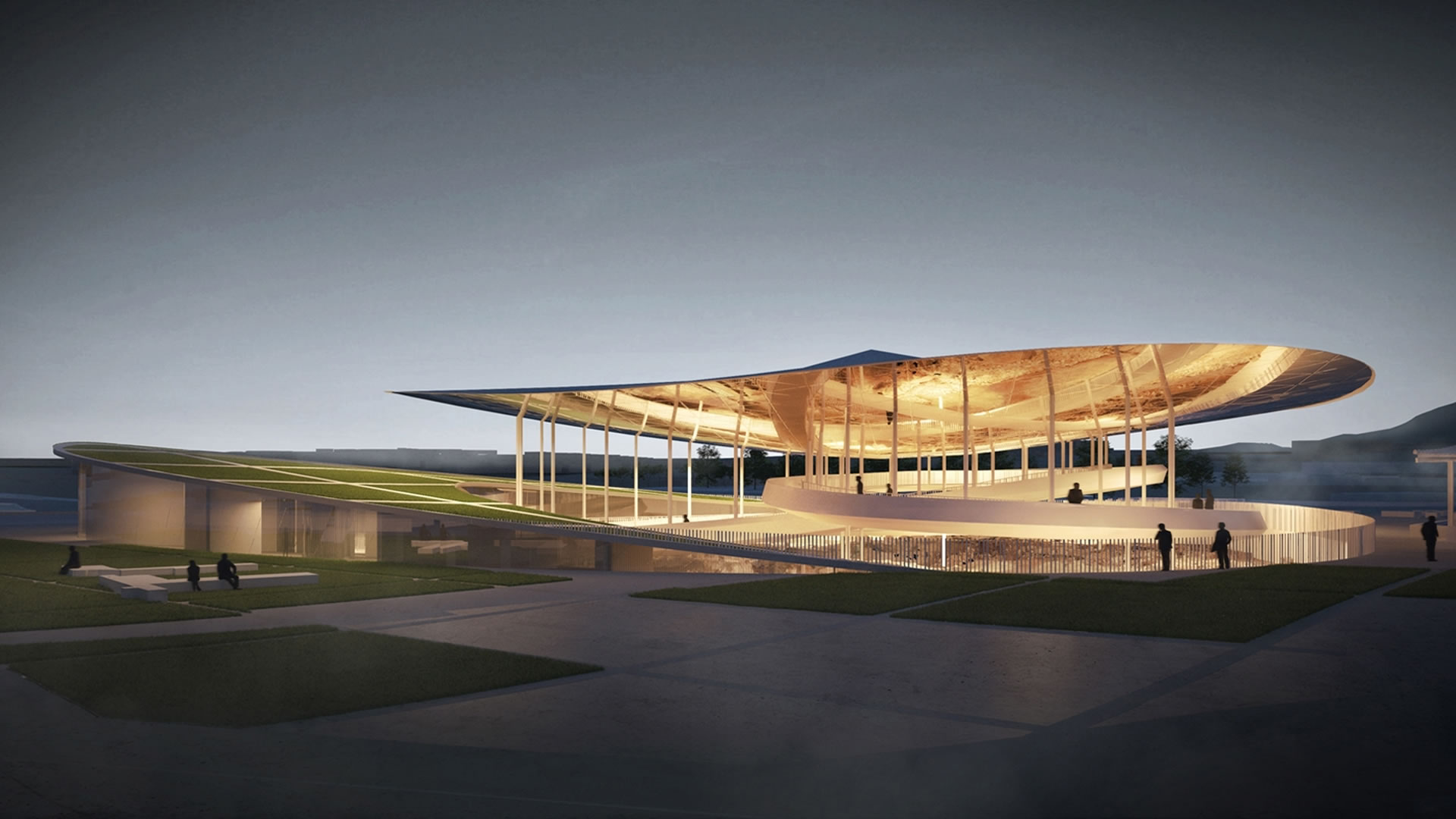 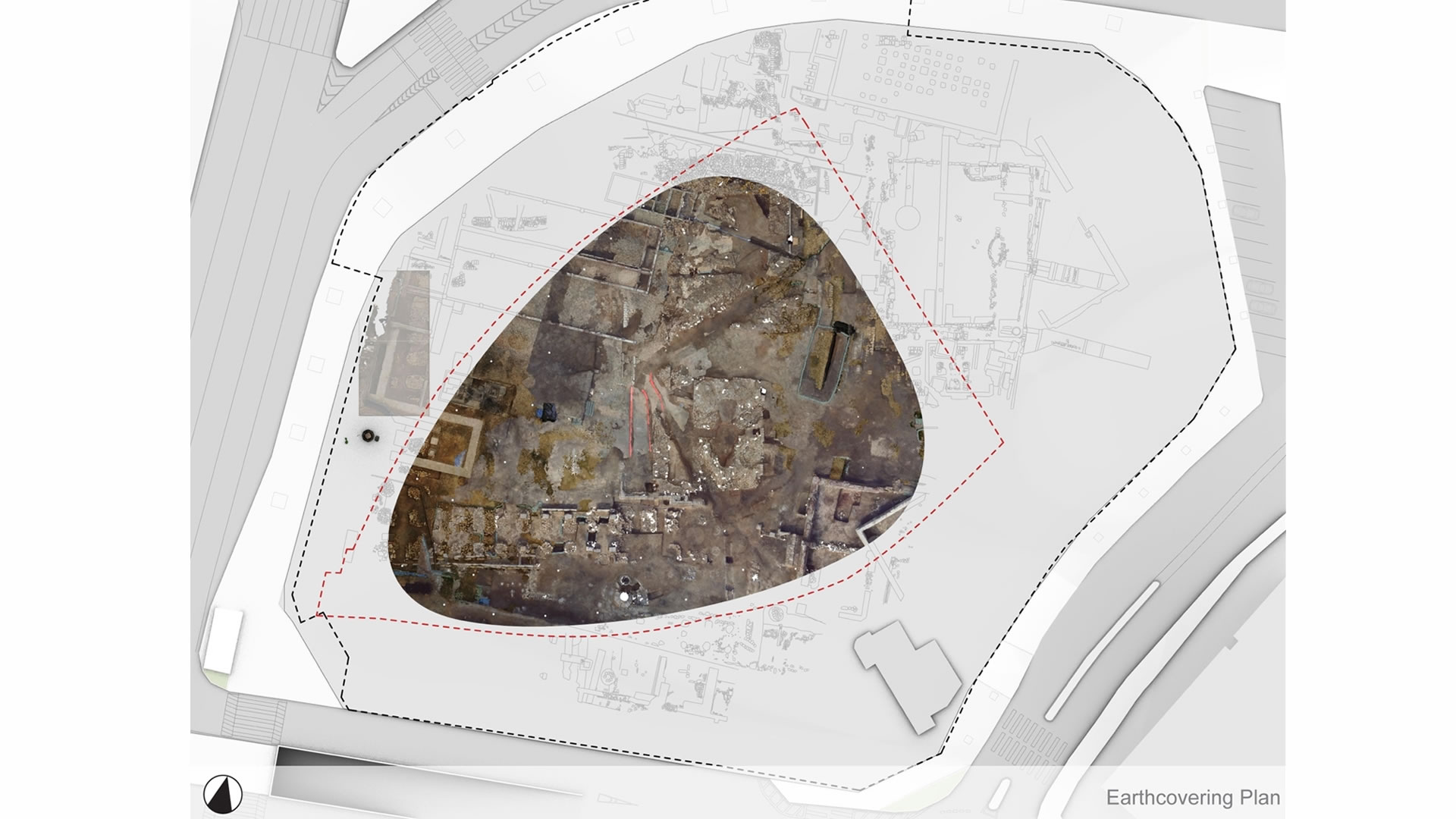 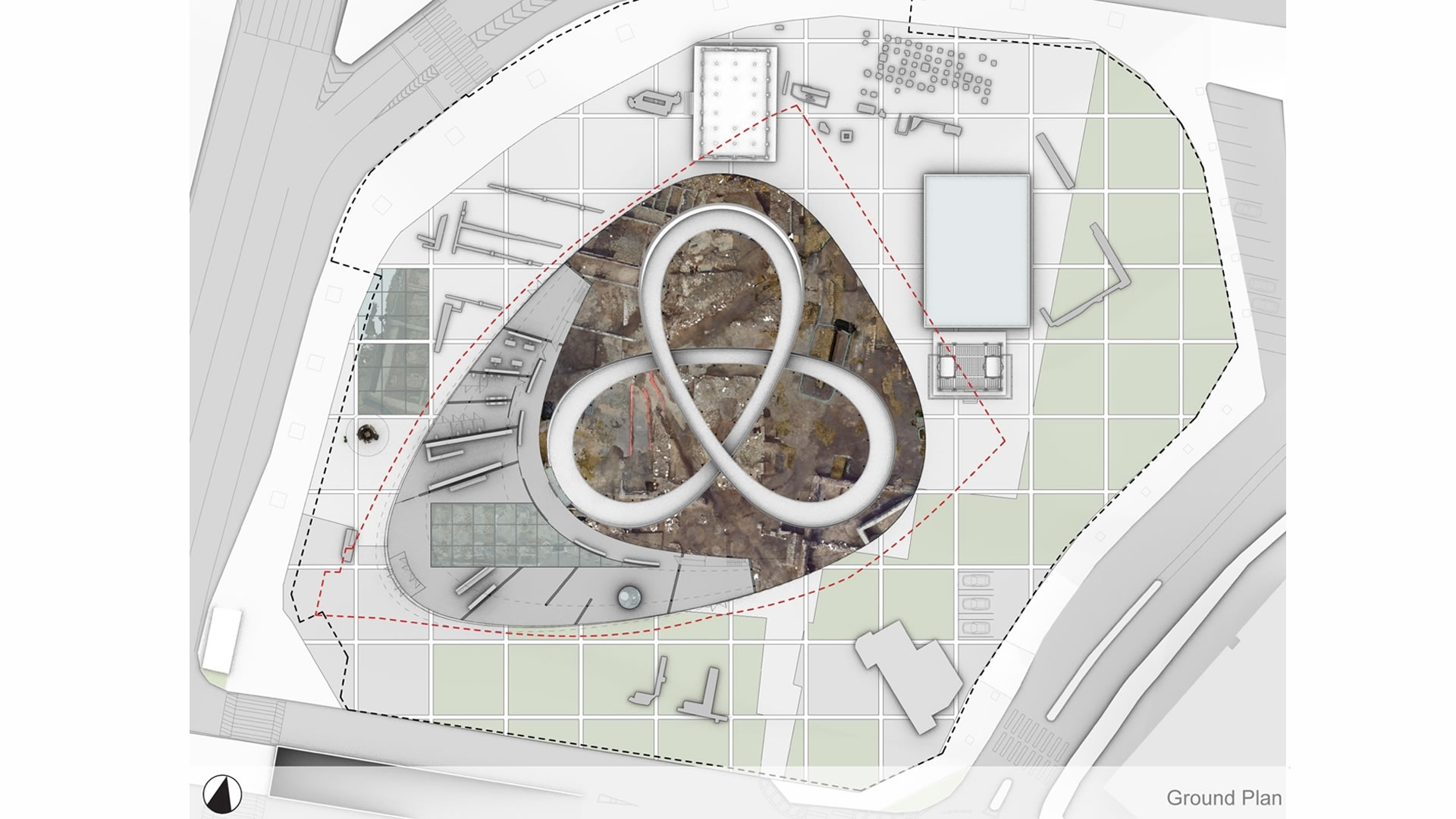 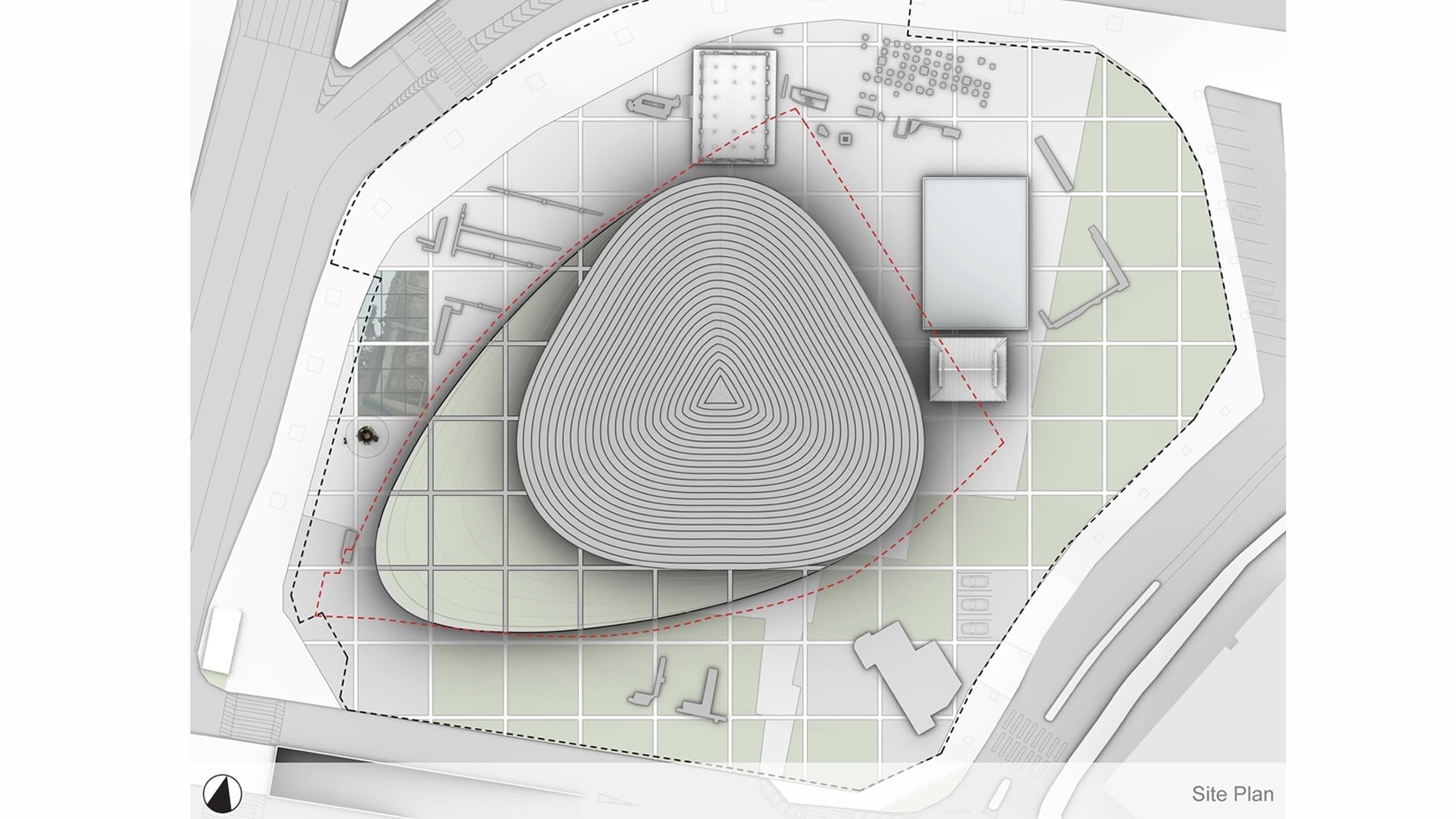 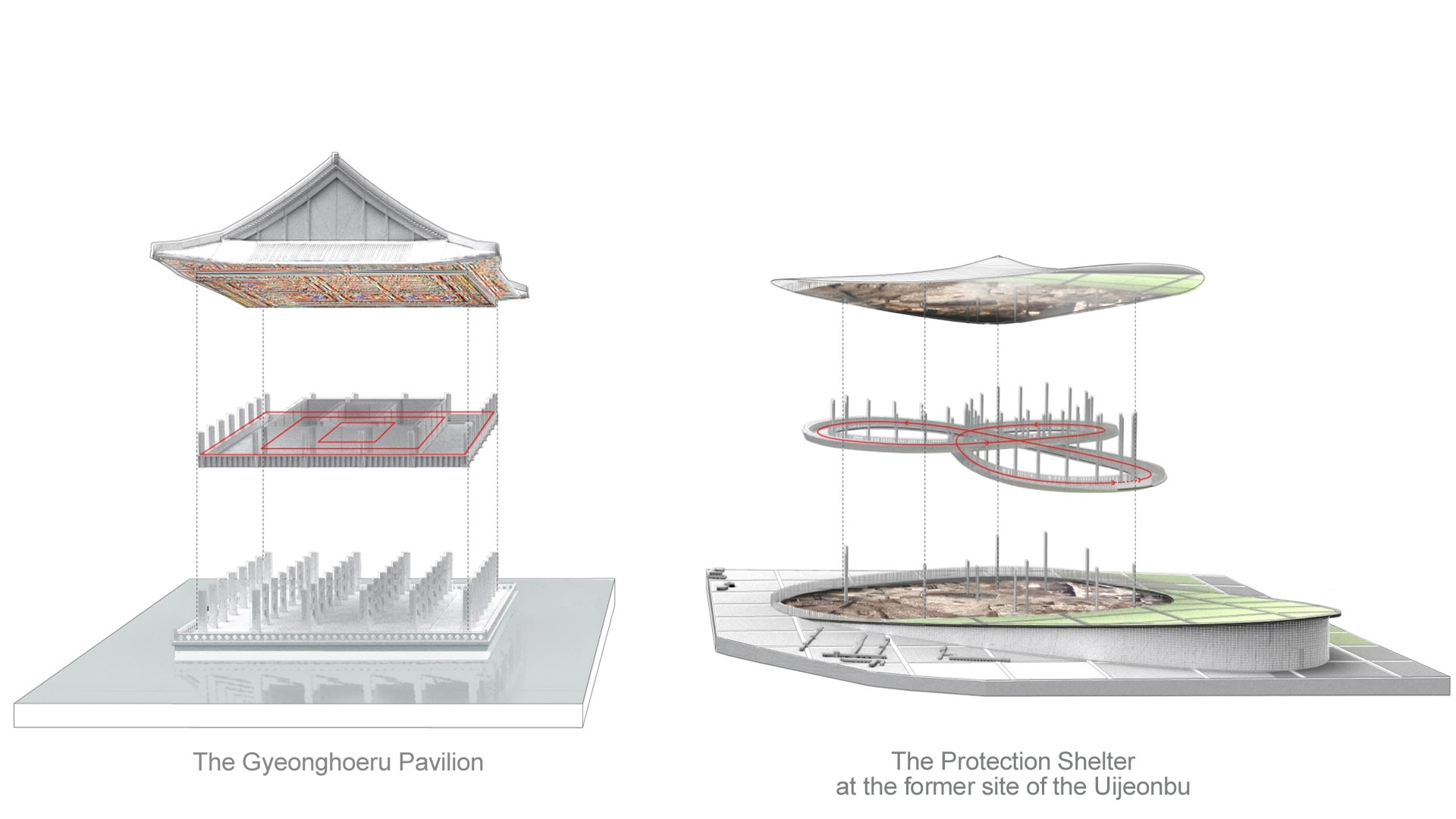 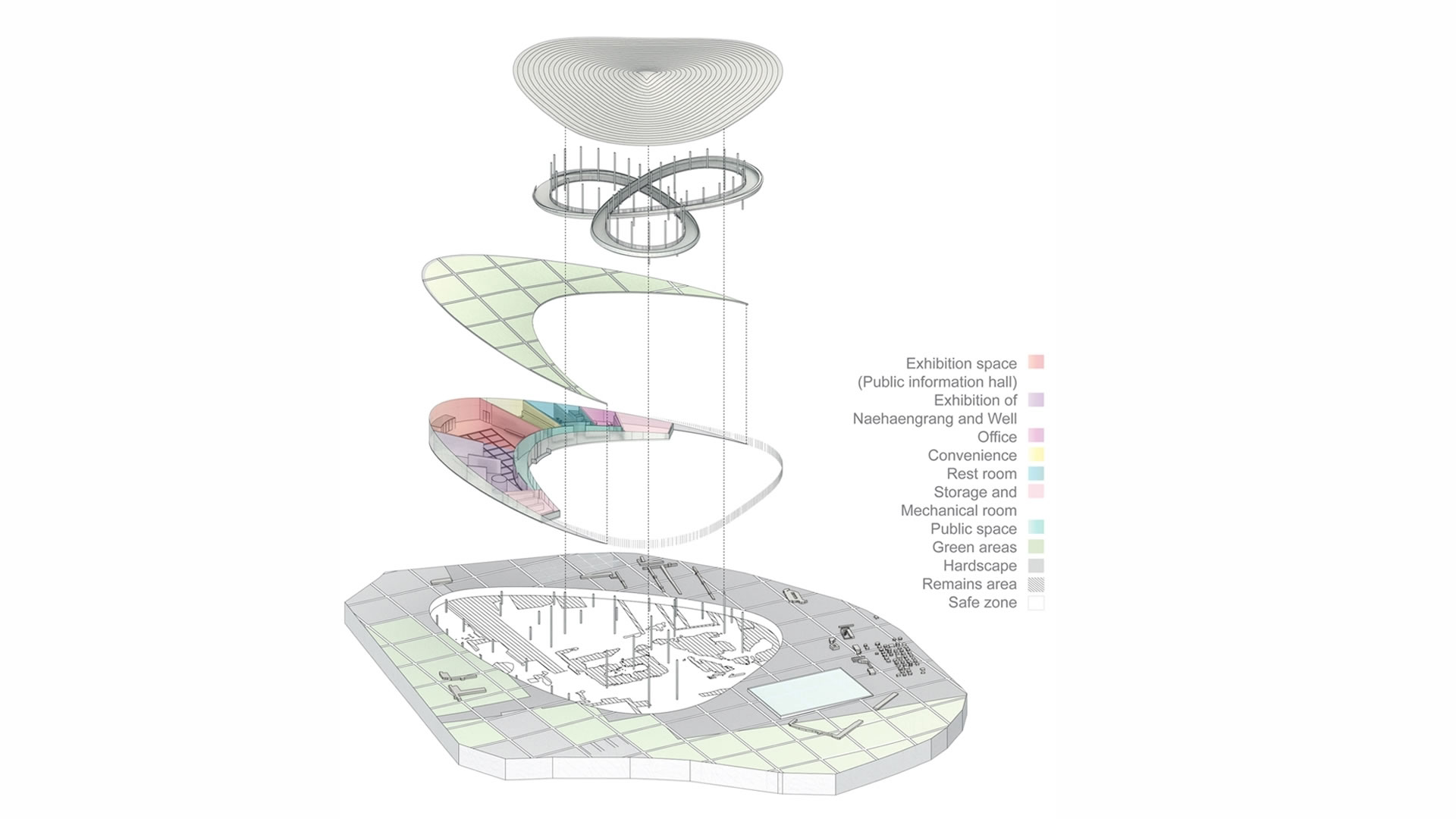 As “all tangible things are finite”, ideas are timeless.   Ideas keep a nation together.    The specificity of the former site of the Uijeongbu is very important since it represents the power structure of not only the city of Seoul but the whole nation of Korea. The compounds for Uijeongbu (Civil), Samgunbu (Military) and Gyeongbokgung Palace (Royal) are physically arranged in a triangle.

Korean Confucianism which rests on three essential values:  filial devotion, humaneness and ritual consciousness greatly influenced the Korean intellectual history.  Today it is argued that the idea of Confucianism still remains a part of Korean society to keep the nation together.

The triangular relationship of the nation’s power structure, its compounds at the project site and three essential values of Confucian teaching greatly influenced the Project in terms of organization and circulation.

It is the heart of the project accessed from the Indoor Exhibition Hall.  The Trefoil Knot organization of the Protection Shelter over the excavation site merges the three interdependent structure/value mentioned above in a non-hierarchical way into one continuous loop.  This path is placed for the visitors to have a full experience of the site right in the center axis of the Jeongbondang, Hyeopseondang and Seokhoekdang. This axis is parallel to the 10x10 archaeological excavation grid and also intersects the Bagakmaru Mountain.    The trefoil loop path ascends and descends just like the site below representing the different layers of history.

The most important precedent near the site is The Gyeonghoeru Pavilion in the Gyeongbokgung Palace complex.  The Elevated pavilion is placed on a pond sitting on 48 pillars symbolizing yearly astronomical events.  The elevated pavilion is organized in three parts where there is a hierarchical order between the outer to the inner bays representing heaven, earth and man.  Its highly ornamental danceheong eaves and ceiling can be seen through the reflection of the pond which is very unique.

The Protection Shelter at the former site of the Uijeonbu floats over the excavation site as  Gyeonghoeru Pavilion floats over the pond.  While the top part of the the light steel roof structure resembles and directed towards the Bagakmaru Mountain the highy polished stainless steel convex ceiling reflects the ruins below thus the ceiling functions like the reflective pond at The Gyeongheru Pavilion except it has now a new use.  The main purpose of this reflective ceiling is to act like a facade so the illuminated excavation hole will attract the crowds walking in a distance without any need of media facade or movable light which will not hamper its harmony with Gwanghwamun Gate.

The trefoil knot path is suspended and carried by 48 steel tubes just like in Gyeonghoeru Pavilion except that only 12 would act as pillars to support the roof and reach the excavation site avoiding any harm to the excavated material.

It is the gateway to the indoor exhibitions and the outside Trefoil path under the Protection Shelter.  The landscape building acts as a part of the archaeological park. The trefoil path under the protection Shelter almost acts like a centrifugal force to break and move the ground up to facilitate the required program.  It is accessed via the southwest corner of the site where it is easily accessible from the metro station and the Gwangwamun Square. The public lobby is welcomed by the glass covered Naehaengrang remains.  The remains direct the visitors to the east exhibition wing where the Well is also displayed behind a cylindrical glass wall.   Visitors can also access the outside trefoil path through a glass bridge via the corridor with a glass facade looking towards the remains.  Visitors can also relax in the ambiance of the space.  The west wing houses the convenience, restrooms, offices and the technical facilities.  The façade looking towards the Gwangwamun Square is protected by highly transparent steel mesh over the glass façade during protests and violent demonstrations.  The Protection Shelter is also fenced.

The superposition of the 10X10 archaelogical grid is used to reorganize the site.  It is almost a manual for a future archaeologist to come and do a future research and see what is underground.  The old wall traces differentiated between green and landscape.  Foundation stone of Seokhoekdang is reproduced.  The pond and the Gazebo is reconstructed and the modern times on the west side is displayed under glass floor.  The traces of the other findings will be used to produce urban furniture for people to relax at the park.   Since this park is open to public 24 hours a day it is not intended to have fencing and a gate.